So you have big health goals, but you know that in order to succeed, you’re probably going to have to stop eating out so much. Therefore, you’ve wanted to learn to cook, and you know you should probably start soon.

The only problem is, it’s hard to find healthy recipes online. And these recipes must also be easy to cook, since you are a beginner after all. You could attempt to add a healthy spin to the plethora of minute-long cooking tutorials on Facebook, but why bother to get that creative as a beginner?

I was in that same boat just a couple of months ago. All these online cooking tutorials, and I couldn’t seem to find one that was both healthy and easy. I’m sure that a quick search outside of Facebook would have helped, but why bother with that? I was a bit discouraged, after trying several tutorial recipes and adding a healthy spin, and not having much success. I needed something that was planned out, with precise steps, no eye-balling and no guessing.

So of course, not long after, I discovered that I had a pile of several issues of Cooking Light Magazine, stacked up on my bookshelf, never having been touched despite my subscription from the previous year. And to my surprise, these magazines were exactly what I was looking for: easy-to-follow healthy recipes, ranging from breakfasts and dinners to mid-day snack and desserts. Here before me, I had basically found the manual(s) that would help me finally embark on my journey as a cook.

Fast forward two months, and I’ve learned to cook several recipes, averaging out to about one per week. I’ve mastered the simple smoothie bowl, and attempted to master the art of making delicious vegetarian curry recipes. Soon, I hope to learn how to properly cook meat without killing myself (I’ve heard salmonella is a real scary thing). I discovered not long after that how awesome Cooking Light’s website is, and how many more recipes were available on there. This made it even easier to shop for ingredients, as I could discover new recipes on the go!

By far though, I love learning to cook breakfast foods, especially eggs. So, below, my most favorite egg recipe: 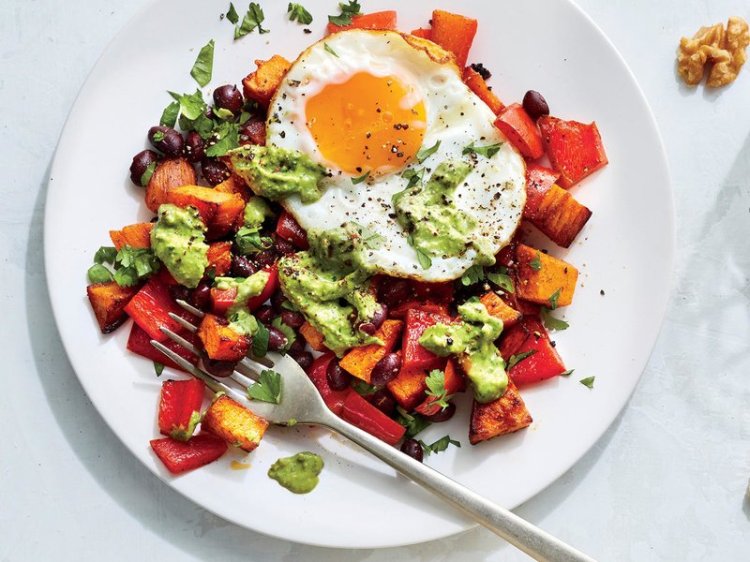 This recipe is amazingly simple to make if you are a beginner who is comfortable enough with using oils. With the incorporation of several veggies, as well as protein from the eggs and fats from avocado and oil, you give yourself a very balanced breakfast. Much better than Kellogg’s in my opinion!

I personally made a few modifications:

2.) I also don’t use the green goddess avocado sauce, simply because I don’t always have the time on hand to make it, or I don’t every ingredient readily available. Instead, I’ll top with fresh diced avocados, which, while not as flavorful, still adds a nice finishing touch.

For anyone wanting to learn to cook healthy meals, I highly recommend checking out Cooking Light‘s magazine and website! If you decide to try this recipe, let me know how it turned out in the comments below!